From May 26-31, a group of Robert Morris University staff members, students, alumni, and friends embarked on a group bike ride from Pittsburgh to Washington, D.C., with stops in Ohio Pyle (Pa.), Cumberland (Md.), Hancock (Md.), and Harpers Ferry (W. Va.). The following is an account of the fourth day of the journey as experienced by RMU Senior Writer Valentine J. Brkich.

When Annie sang “The sun'll come out tomorrow…” I used to think she was full of crap.

But you know what? After one of the most miserable days I can remember, the sun really did come out the next day, and my ride to Harpers Ferry, W. Vir., turned out to be best day thus far.

Following the misery of the previous day's ride, I wasn’t sure if I’d even be able to get out of bed let alone ride another 60-plus miles along the muddy, skeeter-infested C&O Canal Towpath. But rather than mope about my situation, I decided to get up early and try to get some good miles in before lunch.

Down at the local convenience store I stocked up on Gatorade and bought a couple sausage and egg burritos for fuel. I ran into Ethan and Mark, who like me wanted to get moving while it was still somewhat cool out. So at 6:30, the three of us hit the trail together.

After slogging it through the fetid mud and slop from Cumberland to Hancock, starting the day off on more than 10 miles of paved trail along the Western Maryland Rail Trail was heavenly. Yesterday I had struggled to keep a pace of 8-9 mph. Today, right from the start we were wooshing along the smooth asphalt track of the rail trail at a brisk 13-mph clip. We were moving so fast, in fact, that we missed the connection to the C&O and ended up riding a couple miles down the road to Ft. Frederick State Park, where we were able to reconnect. We had 25 miles in the bank by 9:30 a.m. 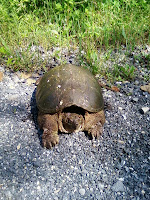 When we finally made it back on the C&O, we were elated to see that most of the mud and water had dried up, creating a firmer surface that was much easier to ride on. For once I was actually enjoying myself out on the trail, taking time to appreciate our remote surroundings, wedged between the old canal and the rushing waters of the Potomac River. At one point we saw a deer up ahead, and we followed it for quite some time as it bounded down the trail ahead of us before disappearing into the brush along the side. (Photo: One of the many new friends I made along the ride)

Part of the trail was being repaired at the time, so they put us on a six-mile detour around the work, along some nicely paved but hilly Maryland back roads. At first I welcomed the change, enjoying the cool breeze as I glided down a lengthy hill along the road. But of course, what goes down must come back up, and I soon found myself pushing my bike up the hills as the midday sun radiated off of the black asphalt underfoot.

Riding your bike along the road can be a humbling experience, too. You don’t realize how slow you’re really moving on a bike until a motorcycle whizzes by you effortlessly at five times your speed.

Now I know how the Amish feel. 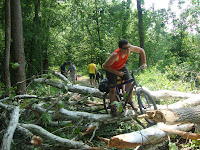 Eventually the detour came to an end and we were back along the C&O. I was still feeling pretty good but I noticed I was running low on water. So, a few miles down the trail, as Mark and Ethan decided to take another break, I told them I was just going to push on alone and try to make it to the next town as soon as I could. (Photo: Mike Yuhas conquering a downed sycamore along the C&O)

That next town was Shepherdstown, about 12 or so miles outside of Harper’s Ferry. After carrying my bike over a couple downed sycamores and navigating some washed-out parts of the trail, I took the exit to this lovely college town and headed straight for the nearest eatery, the Sweet Shop Bakery. Other than people staring at me like I was a leper, I had a wonderful lunch outside of the bakery as the normal, showered masses went about their daily business. (Photo: Sweet Shop Bakery in Shepherdstown)

I rode the rest of the way into Harpers Ferry alone, rolling into town around 2 p.m. as the temperatures hovered in the low 90s. I didn’t find out until about an hour later that I had been the first person to arrive! It was an amazing turnaround. The previous day I had barely survived, and here I was the first rider to reach our Day 4 destination. When the others got into town and saw me sitting there sipping on an iced coffee, they looked at me as if I were a ghost come back from the dead. Which, in a way, I guess I was. It was one of my prouder moments. 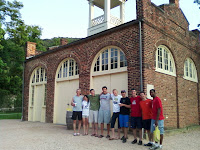 Later that evening we chowed down at The Anvil Restaurant (I actually ate an order of something called "Crab Balls") and then we walked back into town for some ice cream.Spirits were high. We only had one more day to go in our adventure. Just 60 more miles to D.C.!
Was this nightmare...I mean, adventure really coming to an end?
(Photo: The RMU crew enjoying ice cream outside John Brown's Fort)
Posted by RMUnews at 10:36 PM