Fom May 26-31, a group of Robert Morris University staff members, students, alumni, and friends embarked on a group bike ride from Pittsburgh to Washington, D.C., with stops in Ohiopyle (Pa.), Cumberland (Md.), Hancock (Md.), and Harpers Ferry (W. Va.). The following is an account of the second day of the journey as experienced by RMU Senior Writer Valentine J. Brkich.

I dragged myself out of bed at 6 a.m. on Friday, feeling sore but refreshed following the best sleep I’ve had since before my kids were born. I think my body put itself into some sort of comatose state in order to recover from the previous day’s abnormal physical exertion. Today was to be the toughest day in our itinerary: 72 miles, over 40 of them uphill, to Cumberland, Md., where we’d leave the G.A.P. and begin along the C&O Canal Towpath.

You may have been awakened by a horrific scream around 6:30 that morning. It was just me sitting down on my bike seat.

After an 11-mile, taking-it-easy ride to Confluence, we stopped for breakfast at the Lucky Dog Café, which had graciously agreed to open its doors early for our group and provide some much-needed nourishment for our long ride ahead. One of the people I ate with was Steve, an Oracle database guru for Highmark, who’s pursuing his M.S. in Computer Information Systems from RMU. He and Garrett, an associate consultant and researcher for RMU’s Bayer Center for Nonprofit Management, were our group’s speed demons, and they usually finished the day’s journey hours before the next closest rider. For Steve, who rides his bike 45 minutes to and from the office every day, this journey was all in a day’s work.

It started to sprinkle as we left the café and began our ascent towards the Eastern Continental Divide, forty-some miles away. An ominous sign greeted us as we hit the trail: no cell phone service for the next 30 miles. I felt like we were entering into the dreaded land of Mordor.

Fueled by a hearty meal of eggs, bacon, home fries, and coffee, I managed to keep up with a few of the riders for a little while as we rode through the light morning drizzle. However, by the time we reached the now closed Pinkerton Tunnel, about a mile south of Markleton, Pa., I was ready for a break. From that point on, until I made it to our lunchtime stopping point at Meyersdale, thirty-plus miles away, I’d be on my own. (Photo: Taking a break at the old Pinkerton Tunnel)

When you’re out on the trail alone, seemingly in the middle of nowhere, a million things run through your mind:

Boy, it must have been something when the trains used to run here…

Look at the beautiful wildflowers!

I wonder if there are any bears out here?

God, my rear-end is killing me.

HOW MUCH FARTHER DOES THIS HILL GO, FOR CRYIN’ OUT LOUD!! 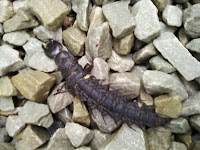 A little before Rockwood, I caught up with the Eschenfelder crew at one of the trail’s rest points. As I chit-chatted with Mike and Jonathan, I noticed Mark was staring directly down at the ground. For a moment I thought he might be praying, which is something I found myself doing many times out along the trail. But then I noticed he was staring at some sort of beetle/caterpillar/crustacean-like creature slinking along the trail’s rocky surface. I have no idea what it was, but let’s just call it the Black Scorpion Monster Thingy From Hell. (Photo: Black Scorpion Monster Thingy From Hell)

After a quick pause to stretch my legs and refuel with one of those cardboard-esque energy bars, I was back on the trail. Bypassing Rockwood, I decided to push on to Meyersdale, where the promise of a downhill trail lay just beyond the horizon at the Eastern Continental Divide. Along the way I paused in Garrett where, coincidently I ran into Garrett, who had just finished his lunch. After making sure that I was OK, he popped in his ear buds and was again on his way. In a flash he was gone, like some sort of bicycle-riding superhero.

From there to Meyersdale I encountered a variety of wildlife including a copperhead, two turtles, and dozens of suicidal grinnies (i.e., chipmunks) who, inexplicably, kept darting out in front of me, narrowly evading the knobby tires of my mountain bike. (Photo: Copperhead, I think) 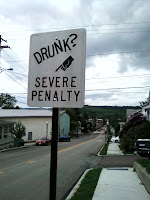 Arriving at Meyersdale I felt a renewed sense of positivity as I joined up with others for a short lunch break in town at the Java Café. We were getting close now. It was a mere 11-12 miles to the Divide. From there we’d be able to relax and glide downhill for the next 25 miles to Cumberland. Meyersdale, a.k.a., The Maple City,seemed like an inviting town, unless, that is, you were drunk. (Photo: Not-so-subtle warning to drunks) I even met a woman in the café who hailed from my hometown of Beaver—a coincidence I took as a sign of good things to come.

But then, as I enjoyed an iced coffee, it began to drizzle again. Off to the west a line of seriously dark clouds was moving in. I decided it was time to get moving and get to the Divide before the real heavy stuff started coming down. So I pushed my bike back up the long hill to Meyersdale Station to rejoin the trail. (Photo: RMU bikers at Meyersdale Station)

Before I had embarked on this journey, when people asked what I would do if it rained, I scoffed at their concern. It would be fun to ride in a storm, I said. It would only add to the adventure.

Then the rain came. And the thunder. And the lightning.

Should I take cover under the canopy of trees off to the sides? No, they tell you not to do that. Then again, if I stay out here, I’m the highest point on the trail…

Great. They’re going to find me dead out here. Fried to a crisp by a bolt of lightning! And just as the trail was about to get easy…

I want my mommy.

The rain was relentless, and the condition of the trail quickly deteriorated. For 10 miles or so, It was like riding through oatmeal. 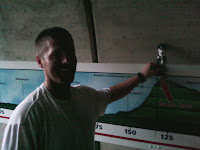 Then, finally, I saw it—the Eastern Continental Divide, just a few hundred yards ahead inside a small tunnel! After one final and, in my opinion, highly unnecessary incline, I pedaled my bike into the beautiful, lovely, dry concrete shelter. Todd was only a hundred yards or so behind me, and when he reached the tunnel I felt like hugging him. However, I make a strict policy of mine never to hug a co-worker. So we just high-fived. (Photo: Todd, after the high five, holding RoMo in front of the map at the Eastern Continental Divide)

Soon the rest of the group from the café joined us as we celebrated the official end of the climbing. From here on out, it would be nothing but an effortless downhill ride into Cumberland…and then on to D.C.! 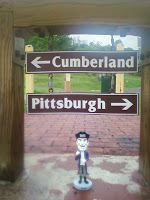 Riding through the Big Savage Tunnel, we reached Frostburg and began what should have been a relaxing 16 miles into Cumberland. But then Storm #2 struck, complete with hail, lightning, and a stiff wind that was trying to blow us back up the hill. Instead of coasting down the trail, I had to pedal with all my might, all the while beseeching the Almighty to protect me from being scorched by a fiery bolt of electricity. (Photo: RoMo at Frostburg before Storm #2)

By the time I reached Cumberland, my entire body was a giant prune and there was an inch of water in my saddlebags. I’ve been dryer swimming pools. At the Holiday Inn, I took a shower and then, since I wanted to remain in the shower but no longer had the strength to stand, I took a bath for the first time in around 20 years.

I couldn’t believe we’d only made it through two days. We still had three more to go along the C&O Canal Towpath, which, I’d been told, was basically a narrow, bumpy, 185-mile dirt path.

But surely things couldn’t get any worse…right?