From May 26-31, a group of Robert Morris University staff members, students, alumni, and friends embarked on a group bike ride from Pittsburgh to Washington, D.C., with stops in Ohio Pyle (Pa.), Cumberland (Md.), Hancock (Md.), and Harpers Ferry (W. Va.). The following is an account of the third day of the journey as experienced by RMU Senior Writer Valentine J. Brkich.

After a hearty breakfast at the hotel and a quick stop at the local drug store for some insect repellent – a MUST on the Chesapeake & Ohio (C&O) Canal Towpath – we set off for our next destination, Hancock, Md., a little over 60 miles to the east. Despite the previous day’s challenges and the uncomfortable task of putting on sopping wet shoes first thing in the morning, we were in good spirits. After all, we had made it through the toughest part of the journey—the long uphill climb to the Eastern Continental Divide. From here on out the path would either be flat or downhill. 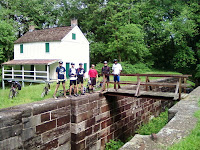 As we started out, we were having a lot of fun riding through the muddy mess that was the C&O—the result of the previous day’s torrential downpours. Within just a few miles, we were splattered with mud and laughing at our utter griminess. A couple miles in, we stopped briefly to check out a Confederate soldier’s family cemetery along the trail, one of the first signs that we were officially on the southern side of the Mason-Dixon Line. (Photo: One of the many old locks along the C&O) 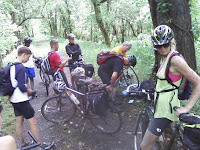 It didn’t take long, however, for the novelty of the mud to wear off. Before long, my legs had grown weary of fighting through the thick, foul-smelling slop. It soon became mentally exhausting as well trying to avoid the puddles, switching back and forth, back and forth, from one lane to the other. And when you did get a chance to stop for a break, you had to be sure to spray every inch of your body with a generous amount of insect repellant in order to fend-off the hundreds of blood-thirsty mosquitoes that would instantly descend on you. (Photo: Fixing a flat in West-Nileville)

And what about this “downhill the rest of the way” stuff I’d been promised? Every once in a while, when you’d come upon an old lock, you’d experience a brief downhill run. But for the most part it was up and down, up and down. The ups were never that steep, but when you’re slogging through thick, energy-sapping mud, even the slightest incline is unwelcome. It didn’t take long before I’d fallen back and was once again on my own.

Our first stop was the tiny town of Paw Paw, about 30 or so miles down the trail. Of course, I missed the turn off and had to backtrack a half mile once I realized my mistake. In town I saw a number of mud-caked bikes parked outside of Anthony Jr.’s, the local pizzeria. I found the crew I’d been riding with earlier in the day already inside. We were all getting some pretty bizarre looks from the locals, who’d probably never seen a grungier bunch of bikers. And I’m sure we all smelled delightful, coated in a mixture of stagnant canal water, mud, sewage, and bug spray. 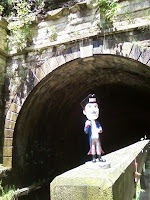 After woofing down an Italian sub and pausing briefly to admire the Paw Paw Memorial Day parade (fire trucks, John Deere tractor, livestock, etc.), I returned to the C&O beneath the unforgiving midday sun. I was glad when I finally reached the cool shelter of the 3118-foot Paw Paw Tunnel. Since the tunnel has no lights and is nearly pitch dark inside, you have to get off your bike and push it the nearly ½-mile to the other side, hoping that you don't stumble across a water moccasin as you focus on the light at the other end. (Photo: RoMo outside the Paw Paw Tunnel)

By the time I’d reached mile 40, I was really hurting. My legs, worn out from the previous day's never-ending climb, felt like Jell-O, my back ached from hours of crouching over my handlebars, and let's just say my bicycle seat and I weren't getting along. I was also feeling sick—a combination of allergies and a lingering sinus infection. And since I had run out of water, I was forced to drink the "treated" well water along the trail, which had a lovely, metallic, slightly rusty flavor to it.

It was around this time when the other riders, seeing that I was near death, took pity on me and selected someone – Todd’s dad, Ed, – to stay back and ride along with me. He’d never admit to it, of course, but I knew what was going on. And I appreciated it greatly.

A little further on down the trail, we stopped at a local establishment known as Bill’s Place, one of the few watering holes along this section of the C&O. Jeff Foxworthy would have a field day with this joint. It’s the kind of place where you wouldn’t look out of place walking in shirtless, wearing a pair of oil-covered bib-and-brace overalls, a golf-ball-sized wad of tobacco in your cheek, and a "Git-R-Done!" hat on your head. We, on the other hand, clad in our skin-tight biker shorts and over-sized helmets, stuck out like a bunch of sore thumbs.

The only real charm of the place is in the ceiling, which is covered with dollar bills that people have signed and left there over the years (Bill's and bills…get it?). We even located the one Todd left there the last time he and his dad rode through. (Photo: Hamer’s bill at Bill’s)

Since Billy Bob and his cousins weren’t exactly giving us that warm-and-fuzzy feeling from over by the bar, we just ordered a few waters and skedaddled whilst we still had the chance.

With about 13 miles to go until Hancock, I found myself riding alone again amidst the jungle-like vegetation of the C&O. Every pedal was agonizing by this point, and the mud and slop had caked both me and my bike in a layer of thick, heavy, smelly filth. Somehow I missed the turn-off to the paved Western Maryland Rail Trail, which would have provided a smooth, almost effortless ride for the last 10 miles of the trip. Instead I continued on down the muddy trail, past the ruins of the Round Top Cement Plant and something with the charming name of the Devil’s Eyebrow. (Photo: Ruins of the old Round Top Cement Plant)

When I finally rolled into town, hungry, thirsty, muddy, and somewhat delirious, I came upon some of the other riders relaxing in the shade enjoying some ice cream. Seeing that I was in no mood for joviality, they hopped on their bikes and led me directly to the hotel, which, of course, sat atop a punishing hill about a half mile down the road. When I stumbled into the lobby looking like the Swamp Thing, they said they couldn't find my reservation and that there were no vacancies either. 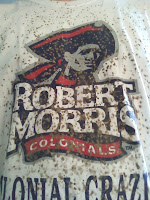 I ended up having to get a room over at another hotel—at the top of ANOTHER HILL!—and it was one of the filthiest, least inviting hotels I’d ever stayed in. The lock on the door was broken, so before I went to sleep I jammed my mud-caked bike between the door and the wall, hoping that it would buy me some time should someone try to break in. Which, after the day I had, seemed totally plausible. (Photo: My filth-covered shirt right, before I threw it in the garbage)

It was an appropriate ending to one of the most physically and emotionally taxing days of my life, and I couldn’t bear to think that I still had two more days and over 120 miles to go.

Heck Val... I feel like I'm riding along with you! Boy I just wish I would have dropped everythig and joined you! NOT!!! But I'm enjoying reading about your adventures and mis-adventures! Fitz

This has been great to relive the ride through your blog. My only small regret is that you didn't get any interview time with the patrons of Bill's.