From May 26-31, a group of Robert Morris University staff members, students, alumni, and friends embarked on a group bike ride from Pittsburgh to Washington, D.C., with stops in Ohio Pyle (Pa.), Cumberland (Md.), Hancock (Md.), and Harpers Ferry (W. Va.). Over the next five days, RMU Senior Writer Valentine J. Brkich will be sharing his first-hand account of the journey. SPOILER ALERT: Val survived. Barely. 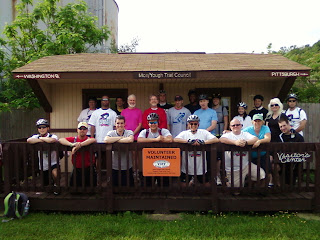 Ride my bike to D.C. It sounded doable.

Sure, I may just be your average

desk jockey, but I try to keep in shape, going for the occasional jog and walking instead of driving to the bank or the grocery store when I can. I even stand up at my desk while working. Surely I was fit enough to ride 60 miles a day at a leisurely pace over a span of five-days.

During the first two days of the trip, the 22 of us would be riding along the Great Allegheny Passage (G.A.P.), an old rail bed covered with a layer of packed, crushed limestone, which snakes its way through southwestern Pennsylvania down to Cumberland, Md. The average grade is only 1% until you reach the Eastern Continental Divide. After that, I was told, it would be “all downhill” as we continued on the Chesapeake & Ohio (C&O) Canal Towpath to D.C.

Heck, this was going to be more like a vacation than anything.

We hit the trail at 9:20 a.m. on May 26 in Boston, Pa. It was the perfect morning. Partly sunny. Temperature in the mid-60s. We were abuzz with anticipation as we mounted our pedal-powered steeds and shoved off for our nation’s capital, a mere 300 or so miles down the trail.

If you’ve never ridden along an old rail trail, it triggers an awakening of the senses. A spring trickles down the rock face to your right. A butterfly flutters through the air to your left. The perfume of spring flowers. The crackle of rubber tire on crushed stone. It’s peaceful and exhilarating, and you feel as if you could ride forever.

Then you hit the 5-mile mark. 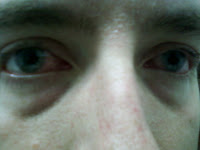 Five miles! Is that all the farther we’ve ridden? How many more do we have? FIFTY-FIVE?!?!

I just need to get warmed up, I told myself, as fatigue began to set in. Then my allergies kicked in, and soon my eyes felt like they were filled with sand (Photo: My feeling-like-they're-filled-with-sand eyes). Then my left knee began to throb. My upper back ached. My lower back began to spasm.

Maybe I should have trained for this.

This first day of our adventure saw a series of bad omens. At Boston, before he had even put foot to pedal, Todd Hamer, the ride’s organizer and RMU’s strength and conditioning coach, got a flat tire and immediately fell behind the pack. Bill Joyce, RMU's director of planning and design, busted the crank on his bike and had to backtrack for a lost bolt. Further down the trail, Ethan, a sophomore finance major, clipped a wooden post and tore a gash in his right arm. Later on, his father, Mark, collided with an oncoming rider, flipped over his handlebars, and bent his front fork. Jamie, a sophomore psychology major, had a bad spill and suffered a painful cut on her left arm and a bruise on her hip. All along the trail there were landslides and signs of recently downed trees, giving you the eerie feeling that, at any moment, you could be pedaling your little heart out to avoid being crushed by a falling sycamore or an avalanche of mud and rock. And did I mention the unforgiving headwind?

So much for a leisurely ride along the trail. 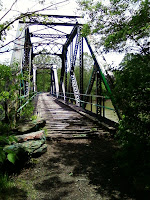 We persevered, however, and continued on down the dusty trail, past the Old Dravo Cemetery (est. 1824); past secluded hamlets like Buena Vista, Van Meter, and Whitsett; and past the ghosts of former industry, like old trestles and the site of the once bustling Banning No. 1 Coal Mine.

Somewhere along the trail I caught up with Jamie, who was struggling mightily under the mid-day sun. Luckily Mark J. Eschenfelder, Ph.D., associate professor of economics at RMU, his brother Michael, and their friend Jonathan were already there helping. After a brief stop to rest and rehydrate, we decided to walk a ways down the trail before hopping back on our bikes. Jamie recovered and was soon chugging along again.

After a brief stop in Connellsville for lunch at the local Sheetz (Gatorade and a pre-wrapped mystery-meat sandwich), we continued on down the trail. By this time I had learned to hate milepost markers. You try to ignore them, so as not to see what little distance you’ve covered, but it’s impossible. They stick out from the foliage along the side of the trail like signposts of your physical inadequacy, mocking you as you huff and puff your way along the path. 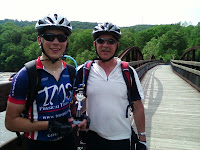 Finally in mid-afternoon we began to trickle into our day-one destination: Ohiopyle. Around 3:50 p.m. I slowly rolled across the town’s familiar arched bridge, which spans the white waters of the Youghiogheny River. Ethan and Mark were already there, so I had them pose for a photo with RoMo, who I'd brought along for the ride (Photo: Ethan and Mark with RoMo).

I hope I can stand up long enough to take a shower. 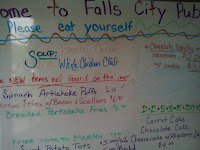 An hour later, just as we were about to head off to dinner at Falls City Pub, a freak squall blew through, knocking out all power in town. Clearly the gods were against us. Fortunately there was enough cold beer to hold us off while Seth, an online MBA student, ordered pizzas from the next town over. When the pies finally arrived nearly an hour later, we tore into them like ravenous piranha. I managed to grab just two pieces in the frenzy, as the pub’s menu of mouthwatering specials stood nearby, reminding us of what we could have been eating (Photo: What we could have been eating).

And so, still hungry and getting stiffer by the minute, I staggered back to my room to hit the sack early (8:30 p.m.) and prepare for the next day—the mostly uphill, 72-mile jaunt to Cumberland.

Yes. The Pub recognized how ravenous we were after our ride and were fearful of what we might do. So they made that request in order to protect their staff.